Pierre-Laurent Aimard appears at the Pierre Boulez Saal this October.

In this recital evening, Aimard – a founding member of Pierre Boulez’s Ensemble intercontemporain in Paris – performs works written for him by Ligeti, Carter, György Kurtág, George Benjamin, and Marco Stroppa. 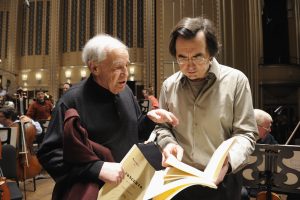 “What was extraordinary with Boulez was his kind of morality with the music. There was a passion, a man burning for music, irresistibly, that you could feel at any second of his music making – of course, well controlled and somewhere almost behind the controller, but always there. He had a way to serve his own music and other people’s as well. This is something that I think has influenced – and I hope will continue to influence – generations.” – Pierre-Laurent Aimard on Pierre Boulez